LOUISVILLE, Ky. — Sept. 27, 2013 — (NYSE: GE) — The revitalization of American manufacturing is on display at Appliance Park—headquarters of GE Appliances—as the business celebrates 60 years of operations in Louisville, Ky. On September 28, Appliance Park is opening its 900-acre campus to an expected 10,000 current employees, retirees, their families and friends at its 60th Anniversary Open House, to showcase the results of the $1 billion of investment in the business and to celebrate GE’s proud history in the Louisville community.

GE has opened two new factories at Appliance Park and rebuilt two factories to accommodate production of six new product lines. Upgrades have been made to several other areas of the facility, with more than 3,000 new American jobs created along the way.

“This investment isn’t just a physical transformation, but also a demonstration of American productivity and ingenuity,” said GE Appliances President and CEO Chip Blankenship. “We are proud to build upon GE’s rich history in Louisville and look forward to another great 60 years.” 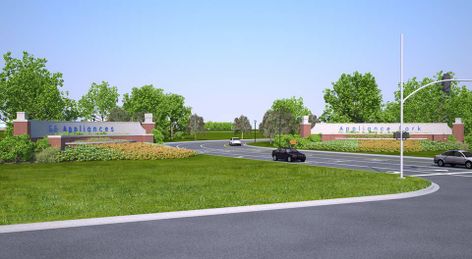 About the Celebration
Appliance Park’s 60th Anniversary Open House offers more than 30 attractions throughout the day for its employees, retirees and their families and friends to enjoy. Some highlights include:

From the Inside Out: Appliance Park Gets a Makeover
Residents who drive past the Park may notice fresh paint on the buildings and newly planted trees, two of the projects underway to improve the visual appeal of Appliance Park. Diagrams for a new Poplar Level Road entrance will be revealed at the Open House. Attendees will have the first opportunity to purchase a brick or paver for the entrance with all proceeds going to scholarships to educate the next generation of American manufacturing workers.

A Member of the Community
Appliance Park’s success could not be possible without the support of the Louisville community. GE invests in its employees and the local community through service, grant programs, and sponsoring arts and education programs. Annually, GE Volunteers log thousands of volunteer hours to help those less fortunate, and GE Appliances’ Employee Community Fund campaign ranks third among Louisville companies in its level of employee giving to the Metro United Way. The Jefferson County Public School System has received $35.5 million in grants from the GE Foundation for improved math and science education. In addition, GE’s long-standing partnerships with Actors Theatre and the Kentucky Opera have helped further the arts within the community.