LOUISVILLE, Ky.—September 26, 2016—FirstBuild, a global co-creation community backed by GE Appliances, a Haier company, announced the winners of its Mega Hackathon: The Future of Cooking challenge. Teams of more than 200 designers, engineers, makers, students and foodies converged at FirstBuild’s microfactory in Louisville to design, build, code and hack the next generation of cooking devices. More than $15,000 in cash and other prizes were awarded.

Ideas ranged from a combination wall oven and induction cooktop to a range with built-in smoking drawer. Designs were judged by representatives from FirstBuild and the Mega Hackathon’s more than 15 sponsors including Renesas and 3M.

With access to advanced manufacturing tools such as 3D printers, laser cutters, water jets, CNC mills, Bridgeport mills, welding, hand power tools and soldering stations, the teams worked to conceive and create devices they would want in their own homes to make their lives easier. After reviewing the latest innovations and eating some delicious food, the teams’ ingenuity was evident in their creations.

FirstBuild is an online community of engineers, designers, makers and home enthusiasts dedicated to conceiving, co-creating and building the next generation of major home appliances. Participants identify market needs, directly participate in the product development and watch via social media as ideas speed from mind to market. 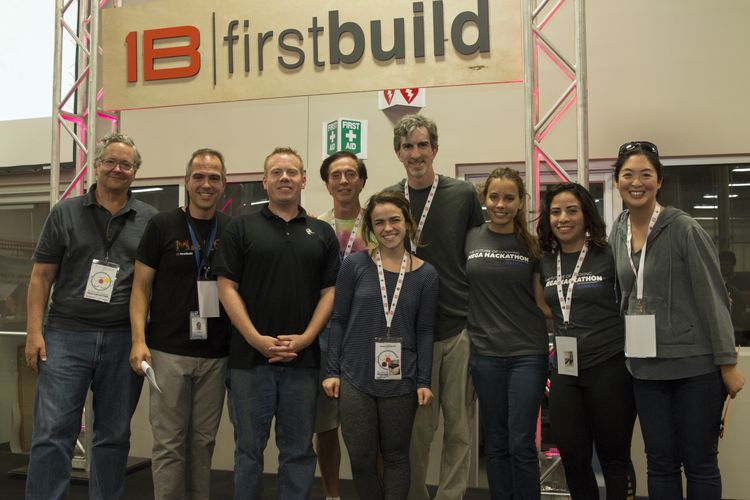 Each of the headlining sponsors, FirstBuild, Renesas and 3M, selected winners from a pool of 14 designs. The top team for each category follows.

“We opened our doors to the public to showcase FirstBuild’s state-of-the-art model of manufacturing that embraces the maker movement and closes the gap from mind to market,” said Larry Portaro, director of FirstBuild. “The prototypes generated by these teams were outstanding, and illustrate how ideas can come from anywhere and anyone. We wanted the community to envision what they saw for the future of cooking, and in a single weekend they created outstanding products.”

About FirstBuild
FirstBuild is a global co-creation community backed by GE Appliances, a Haier company that harnesses the brainpower of the maker movement to change the way major home appliances are conceived, designed and manufactured. A physical state-of-the-art microfactory on the University of Louisville campus and online forum, FirstBuild speeds products from mind to market and enables customization through small batch production, without the costs and risks of traditional mass manufacturing. For more information about how to get involved, visit firstbuild.com.