LOUISVILLE, Ky. — August 20, 2014 — It’s not a standard wall oven. It’s more than a microwave. The latest microwave/wall oven combo is now available with GE’s most advanced cooking technology—the Advantium® speedcooking oven—the ultimate kitchen multitasker. It’s like having four ovens in one: Speedcook, true European convection, microwave and warming/proofing. Upgrading the microwave portion of the combo to the Advantium wall oven, GE is giving these appliance owners a plethora of cooking choices.

According to the American Institute of Architects, more activities are taking place in kitchens. While kitchens haven’t significantly increased in size, they are including more technology. On top of the increasing use of technology, more people are remodeling their kitchens.1 GE’s new Advantium/wall oven footprint and connections match those kitchens that already have the built-in microwave/wall oven set and could prove a space-saver for other consumers looking to remodel the kitchen without adding additional floor space. 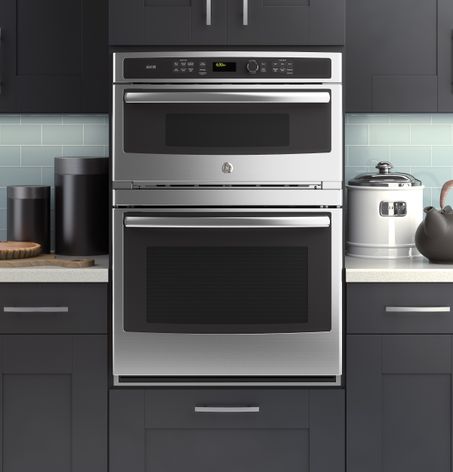 “By purchasing an appliance that already fits the cut-out of current kitchen cabinets, homeowners don’t have to totally reconfigure the kitchen layout which will save them money on the cost of a remodel,” said Paul Bristow, product manager for Built-in Cooking at GE Appliances. “With the built-in Advantium/wall oven combo, consumers can get all the latest features GE has to offer and a product that doesn’t cause installation stress.”

The Advantium component of the wall oven combo features technology that harnesses the power of light, cooking the outside of the food like a conventional oven with radiant heat produced by halogen bulbs above and below the food. This halogen-produced heat receives a boost of microwave energy. The result is it browns food and cooks evenly and quickly—two to eight times faster than a conventional oven—while retaining food’s natural moisture.

Other combination wall oven configurations
“The unique design looks like double wall ovens, but in fact we’ve given consumers multiple options for the upper portion of the appliance —Advantium or microwave,” said Bristow. To dovetail its wall oven launch last year, GE is also offering the combination unit in other variations, including:

Only the Profile and Café™ models feature the option of an Advantium/convection-oven combo with an MSRP of $3,999.

GE Appliances Reveals the New Heartbeat of the Connected Home

Tofurky or Fried? GE Appliances survey asks how Americans like to cook their birds