Currently, the Environmental Protection Agency doesn’t regulate the presence of prescription and nonprescription drugs in the water supply. The long-term effects of regular, small doses of medicines that treat everything from infections to depression have not been researched. In March 2009, a Gallup poll found that Americans rank water pollution as their number one environmental concern.2. 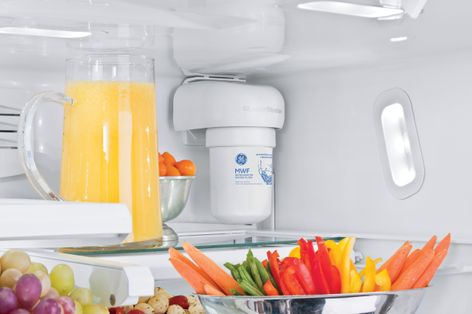 GE's new MWF water filter has been tested by a third party to remove over 94 percent of five trace pharmaceuticals from water and ice.*

“Consumers are more worried about their water than ever before, and at GE we are making meaningful water filtration improvements that bring peace of mind,” said John Nichols, marketing manager for water filtration products at GE Appliances. The latest technology found on the MWF water filter means consumers with both new and older GE refrigerators can change their filters for the most up-to-date filtering technology. GE is the first and only appliance manufacturer in the U.S. to offer refrigerator filters that remove trace amounts of five key pharmaceuticals in ice and water.

The advanced GE MWF filter is National Sanitation Foundation (NSF) Certified and removes 15 contaminants, such as lead, cysts, and mercury. In addition, it has also been tested by a third party to remove over 94 percent of five trace pharmaceuticals including:**

The MWF filter is now available for use in GE side-by-side and French door refrigerators, and has an estimated retail price of $49.99.***  GE’s RPWF filter was the first model to remove pharmaceuticals and fits certain bottom-freezer refrigerator models. The GE RPWF filter has a MSRP of $54.99.***

1. Donn, Jeff, Martha Mendoza, and Justin Pritchard. Pharmawater I: Pharmaceuticals found in drinking water, affecting wildlife and maybe humans.  Accessed on Aug. 30, 2013. http://hosted.ap.org/specials/interactives/pharmawater_site/day1_01.html
2. EWG Finds Hundreds of Pollutants in Nation’s Tap Water. December 12, 2009. Ewg.org. Accessed on August 30, 2013. http://www.ewg.org/tap-water/pressrelease.php
*Reduces five trace pharmaceuticals: Ibuprofen, Atenolol, Fluoxetine, Progesterone and Trimethoprim. The contaminants or other substances removed or reduced by this water filter are not necessarily in all users’ water.
**Pharmaceutical filtration has not been certified by the state of California or NSF.
***Manufacturers set their own retail price.