Share
LOUISVILLE, Ky. — September 19, 2012 — (NYSE:GE) — Teaming up with WaterStep, a Louisville, Kentucky-based organization that works to provide solutions to the root causes of waterborne illness through training and readily-available technology, and Louisville Water Company, GE employees and retirees have been volunteering their time to help design a water purification system that is more affordable, more compact and easier to install in developing countries, while being manufactured with components and tools typically available at any hardware store.
About a year ago, working in the basement of the WaterStep offices, the team received a call that would utilize all of their planning, designing and testing and challenge their goals to make robust, simpler and less expensive water chlorination systems that could be used all over the world. The call came from a charity that needed 50 chlorinators to help flooding victims in Pakistan, and they needed them quickly. Everything the team had planned for worked and set in motion a new vision of what WaterStep could accomplish with their hearts, hands and some GE ingenuity.
Steve Froelicher, GE Appliances senior product architect, and Sam DuPlessis, GE Appliances design manager for high-efficiency water heaters, along with a host of other GE engineers and volunteers, helped develop a water chlorination system for WaterStep that reduced the cost per unit by 75 percent (compared to what they had been purchasing from a supplier) by implementing Lean design principles. Louisville Water Company volunteers helped outline the specifications needed in the new chlorination system and lent their testing and water analysis expertise to the project.
The GE team also followed up with a Lean manufacturing process that would allow WaterStep to manufacture the chlorinators in-house. Between the savings from both the newly designed chlorinator system and in-house Lean manufacturing process, WaterStep will be able to more than double its annual supply of chlorination systems to the 23 countries they serve in the first year of production. 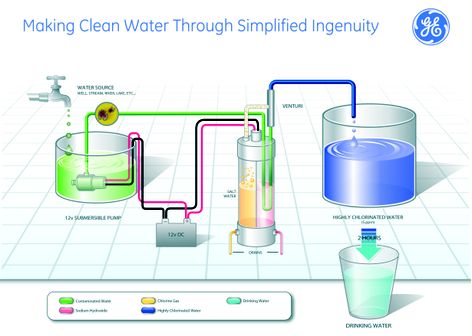 This graphic shows the process GE Appliances and WaterStep are taking to make clean water through a water chlorination system that reduces the cost per unit by 75 percent.
How Lean Manufacturing Cleaned Up the Process
According to DuPlessis, Lean design and manufacturing principles were used to achieve key objectives and initiatives of the program, which included:
“The contributions GE has made to our efforts to provide safer drinking water to people who don’t have nearly enough has been a complete game changer for our organization,” said Mark Hogg, executive director of WaterStep. “With GE’s involvement, we were able to save significant costs on the newly designed chlorinators, have more control over the supply and manufacturing and allow us to own the process. Most importantly, with GE support, we can save more lives by providing more clean water.”
Looking Ahead
One of the key practices of Lean design and manufacturing is continuous improvement. The volunteer team is already thinking about how it can improve on the current design to better achieve the key objectives of the project. In the coming months, the team will be working to develop new technologies and design platforms with the objective of much greater efficiency, decreased cost and refining the logistics of installations in the field.
According to WaterStep:
About GE Appliances
GE Appliances is at the forefront of building innovative, energy-efficient appliances that improve people’s lives. GE Appliances’ products include refrigerators, freezers, cooking products, dishwashers, washers, dryers, air conditioners, water filtration systems and water heaters. General Electric (NYSE: GE) works on things that matter to build a world that works better. For more information on GE Appliances, visit www.ge.com/appliances.
Share

Making Clean Water Through Simplified Ingenuity
This graphic shows the process GE Appliances and WaterStep are taking to make clean water through a water chlorination system that reduces the cost per unit by 75 percent.
View Download
Chlorinator by WaterStep and GE
In conjunction with WaterStep and the Louisville Water Company, GE employees and retirees designed this chlorinator, which is more affordable, compact and easier to install in developing countries.
View Download

WaterStep and GE
GE engineer volunteers recently built 100 of their newly-designed water chlorinators at the 2012 Idea Festival in Louisville, Kentucky for WaterStep to distribute around the world.
View Download