LOUISVILLE, KY—DATE—(NYSE:GE)—Just two years after GE Appliances announced an $88 million investment in new product manufacturing and the addition of 110 jobs at its LaFayette, Ga., cooking products production facility*, it is expanding again. In response to increased consumer purchases of the products made there, the plant will increase employment on first shift and add a new third shift operation, creating nearly 90 new jobs by the end of the year.

“Consumers are clearly responding favorably to our investment in our cooking products. Sales are growing and, in turn, so are American jobs,” said Paul Surowiec, product general manager, cooking, for GE Appliances. “These new products incorporate quality craftsmanship, the latest technology and great features that are delighting consumers and our retail and builder partners.”

The Roper Corporation facility has been a vital part of the Northwest Georgia community since 1973.  It is the largest single-site private employer in Walker County with approximately 1,750 employees, making GE’s newest line of electric and gas cooktops, freestanding ranges and electric wall ovens. 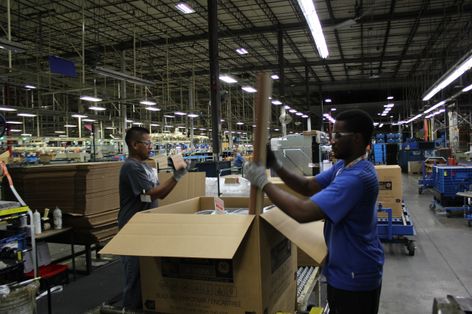 About GE’s New Cooking Products Made at the LaFayette Plant: